Finding Future Floods at the Bottom of the Lake

On the short scale of a human lifetime, sometimes we don’t know what we’re missing. Extreme natural disasters, like enormous floods, happen rarely—possibly not within living memory or even historical record—but they have occurred and will again. The frequency and severity of river floods are expected to increase with climate change and Dr. Bruno Wilhelm understands that the ability to predict them is crucial: a growing population and all of its infrastructure send the potential costs skyrocketing. The trouble with predicting an extreme flooding event, though, is that they occur too rarely to observe any trends in the relatively recent data from our modern-day instruments. Dr. Wilhelm goes beyond this observational data to look at the history of such events that is recorded, in fact, at the bottom of lakes.
The layers of material collected there serve as a “flood archive”, preserving information from past occasions when the enormous flow of a surging river carried larger-grained sediments into the lake. The distinct layers of foreign material allow him to reconstruct this history and identify characteristics of historical severe floods. Focusing on Alpine lakes of Western Europe, Dr. Wilhelm found flood frequency and magnitude varied a great deal over the last 1,000 years, but one thing is certain: the region has definitely witnessed more intense floods than we have experienced in recent decades. Across all the zones tested, he found that flooding was more common during extended (centuries-long) cold periods. The most severe floods, though, happened in both warm and cold periods, varying from north to south along the Western Alps.
Next, Bruno Wilhelm will analyze the complex relationship between large-scale environmental factors driving changes in the climate and the flood patterns he has observed. By pinning down this relationship in a quantifiable way, a very important element could be added to predictive models of flood risk. Knowing the likely influence of global warming on hydrological extremes will be a vital part of plans to mitigate the very real impact of such dramatic floods in the future. 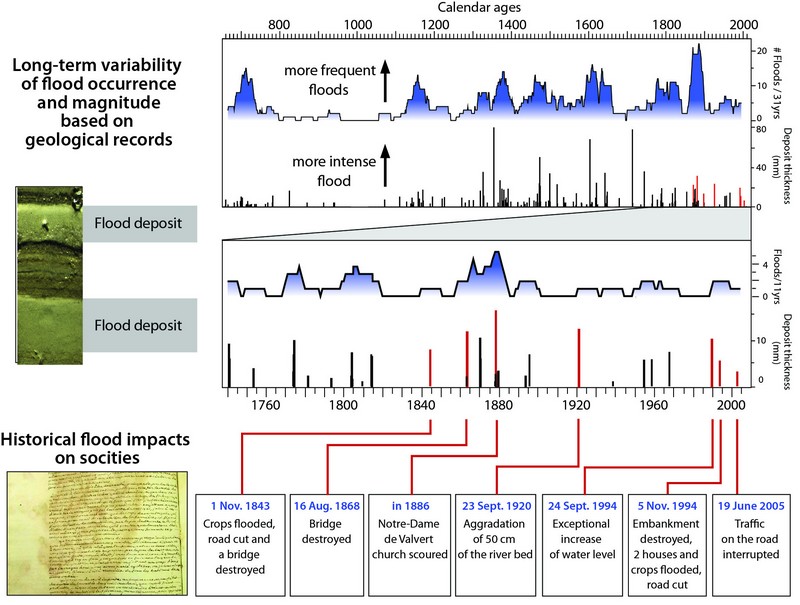 Mountain-river floods are one of the most significant natural hazards, causing serious human and economic losses and severe psychological impacts. The current global warming is expected to lead to an increasing flood hazard within the next decades, in particular for Alpine communities, which are already more vulnerable than in the past. A reliable assessment of the future evolution of the flood hazard over the Alps hence becomes a crucial issue. However, uncertainties of predictive models of extreme precipitations and resulting floods are currently too large to bring robust conclusions on the evolution of such extreme events. This is especially related to the too scarce knowledge on the natural variability of extreme events. Only long-term reconstructions of flood activity allow to access to this knowledge and that’s why such reconstructions are absolutely required nowadays. In addition, these reconstructions should be undertaken at a regional scale to understand how regional flood hazard patterns evolve in response to changes in climate.
Our previous works showed that flood reconstructions, based on the study of lake sediments, enable to explore meaningfully the regional flood patterns and, thereby, the regional forcing mechanisms of flood occurrence at various time scales. This approach hence offers an innovative and robust way to assess the natural variability of extreme precipitations and improve our knowledge of the climate-flood relationships. Consequently, our study aims at building up a homogeneous dataset of long-term records of mountain-river floods over the Western European Alps, by applying this developed lake-sediment approach. This requires a compilation with studies in progress, their refinements and the establishment of new flood records in unstudied regions. Particular emphasis should be brought to apply the same methodology for all records, making them homogeneous and, thus, comparable. This homogeneous database will permit characterizing the different regional flood patterns throughout the Western Alps as well as their respective regional forcing mechanisms. Suggested relationships between the flood patterns and the forcing mechanisms will be statistically tested and quantified. For this purpose, only sophisticated statistics can be undertaken because we need to compare discrete (flood records) and continuous (forcing mechanisms) series. We hence forecast to apply systematically this methodology to all records for a regional quantitative assessment of relationships between the flood frequency/magnitude and the dominant forcing mechanism. Hence, they could finally be injected in predictive models of flood hazard to help a better forecast of regional impacts of global warming on hydrological extremes.
This will allow to appropriately establish hazard mitigation plans and, thereby, to prevent high socio-economic impacts because of potential future high-magnitude floods.