Large annual losses can arise from the collective risk associated with European windstorms. This is due to the clustering of successive storms and the dependency between storm-related wind speed and rainfall extremes. There is growing scientific evidence that natural variations in the large-scale flow induce dependency between successive storms and between wind and rainfall extremes. “For example, the severe storms that impacted France in December 1999 were due to the persistence of a strong upper-level jet stream. We know that this condition provides the energy needed for the explosive growth of damaging windstorms,” explained Prof. David Stephenson.
Prof. David Stephenson is leading a project aimed at quantifying future changes in the collective risk associated with European windstorms. More specifically, he is assessing the potential evolution of European windstorm events by focusing on large-scale changes in the North Atlantic storm track and their relationship to regional changes in landfall windstorms across Europe. He is also examining the relationship between extremes of precipitation, wind speed, wind damage and floods as well as the clustering of extreme events related to windstorms across Europe.

He is collaborating with the UK Met Office to statistically analyze these storm tracks from a set of state-of-the-art high-resolution regional climate model projections for the 21st century. This will allow him to better quantify trends and clustering in future European windstorms. He will then look at the dependency between successive storms as well as between extreme winds speeds and extreme precipitation. In addition, the project will set up a European windstorm research network to help bring together critical mass in this important area of climate science.
The global modeling results may lead to an analysis of the large-scale driving factors of European windstorms under a changing climate, while the European regional modeling runs will provide an understanding of the hazards produced by storms. These more dynamic predictions are highly relevant for the insurance industry, as they provide knowledge about the changing rates of hazards.

Professor David Stephenson is an internationally renowned expert of the statistical analysis of weather and climate. He has developped advanced methodologies that provide deeper understanding of climate variations and improve the quality of forecasts. Since 1998, he has worked with catastrophe modellers in the global reinsurance industry. In 2006, he was also a key founding member of the Willis Research Network, the world’s largest partnership between academia and insurance companies. Professor Stephenson has received Axa funding for his RACEWIN project, which will assess the impact of climate change on European windstorms.

Climate change is a vast area of research. But how precise can mathematical projections be?
We can now make adaptive forecasting of climate change. And instead of just saying “by the end of the XXIe Century, it will be 5 degrees warmer”, we are now trying to make predictions for the next year or the next ten years. It is important for the insurance sector because it allows us to look at the changing rate of hazards. Historical catastrophe models assume that the risk is stationary, but we know that weather events and their rates do change in time. So our predictions get more dynamic. 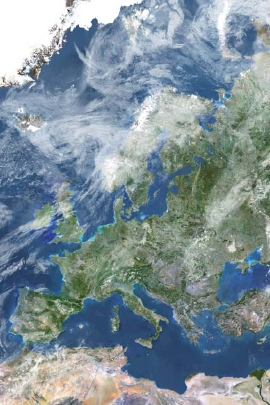 What do we know of the impact of climate change on storms in Europe?
I'm one of the lead authors for the chapter on “Regional Climate and Extremes” in the next Intergovernmental Panel on Climate Change (IPCC) report. One of our problems today is making statements on that more local scale for the future. Today, the different models get very different answers.

To what extent can we really predict a storm today ?
There is some predictability of the strong wind patterns in the atmosphere at least a month ahead, a couple of months maximum. We can say whether there is a higher risk of having storms, but we cannot predict exactly where it is going to happen or how many storms there will be. For example, the severe storms that impacted France in December 1999 were due to the persistence of a strong upper level jet stream. We know that this condition provides the energy needed for explosive growth of damaging windstorms. But we could not go further. It is a probabilistic prediction.

Your RACEWIN project aims at improving these projections. How will you proceed ?
Starting in October, we will collaborate with the UK Met Office to statistically analyse the storm tracks (which trace the central pressure of a storm all along its way) from a set of high-resolution regional climate model projections for the 21st century. This will allow us to better quantify trends and clustering in future European windstorms. Clustering measures the tendency of storms to occur together over a short time in a particular region, rather than being randomly distributed. We will look at the dependency between successive storms and between extreme wind speeds and extreme precipitation. In addition, our project will set up a European windstorms research network to help bring together critical mass in this important area of climate science.

* Note : the IPPC is a scientific intergovernmental body of the United Nations, in charge of assessing the risks of climate change. Its fifth report, a reference document, is due in 2014.